Hello! I’m Diana, another of Nicola’s studio elves. Debbie did a fantastic job updating us on the progress of the artwork in the studio and today I’ll be giving you a peek into some of the hopes and aspirations our youth have for the Singapore contingent.

Can you believe there is less than a month to go before the opening of the 28th Southeast Asian (SEA) Games? We are definitely feeling the heat! This preparatory period can be quite intense and stressful for the athletes (and artists alike), especially when everyone is rooting for Singapore: 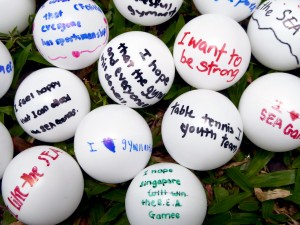 Did you know that the SEA Games used to be called the Southeast Asian Peninsula (SEAP) Games and it was inaugurated in 1959 in Bangkok? That was when Singapore was still part of Malaya. Back then, there were only 12 sports and table tennis was one of them. It’s amazing that the number of sports featuring in this year’s edition is thrice that of the very first SEA Games. It shows how local sports communities have been growing steadily over the years and we’re seeing lots of young talent like Clarence Chew:

Clarence’s younger brother has also written on one of the ping pongs, revealing his wish to represent Singapore. Give him a few more years and this young paddler might just be representing us in the SEA Games!

Speaking of table tennis, look what I found while researching about this timeless sport:

Our founding Prime Minister Mr Lee Kuan Yew playing table tennis during the opening of the Tanah Merah Holiday Camp. He was the driving force behind the growth of sports in Singapore according to former athletes and sports administrators. While it is obvious that we should strive excellence in sports, actually the SEA Games also helps foster cooperation, unity and understanding within the region. Needless to say, sportsmanship is also a big part of the Games. Our young ones are particularly enlightened… 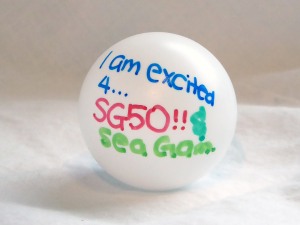 Having hosted the SEA Games thrice, the 28th SEA Games couldn’t have come at a better time because it coincides with our jubilee celebrations. You know what they say – good things come in pairs. Do watch this space for more updates.

If you liked it, spread the word...

what do you think....? Cancel reply